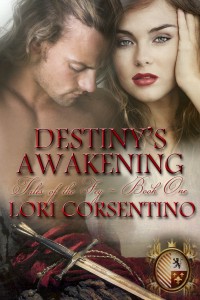 YAY – it’s June 28th! The release day for Destiny’s Awakening available from 5 Prince Publishing! I’m so excited. We’re going to have some fun today. I’ve got bags and bags of swag and both print and eBooks to give away to lucky commentors. I’ve also got a couple Barnes & Noble gift cards for the 10th and 25th commentors!

This first book in the “Tales of The Fey” trilogy tells the story of Evie, an archaeologist who loves things of the past, and Alexander, an enchanted Fey Prince awaiting his date with destiny. Although the story may sound  familiar for many of you who already have read Evelyn, this “Author’s Cut” has much  to offer! With almost 15,000 additional words, there’s a lot more to enjoy.

I hope you consider checking out my twisted fairy tale. It can be purchased from Amazon, Barnes and Noble, Smashwords, and All Romance eBooks. In a couple days, it will also be available on iTunes.

I’m also visiting several sites to spread the word on my release. Check out these sites for chances to win swag and book prizes! Here’s my schedule:

Next week I’ll be visiting M.L. Guida on Monday, July 2 and Jessica Aspen on Thursday, July 5! The following week is extra busy with visits to Lynda Hilburn on July 10, Cynthia Woolf on July 11, and Bernadette Marie on July 12! Check those blogs for more chances for giveaways and swag!

I’ll also be reading from Destiny’s Awakening at the Denver Lady Jane Salon on Tuesday, July 10th at 7:00pm. It’s held at the Wine Loft at 15th and Wazee downtown. It’s an absolute blast and well worth the trip! Swag and prizes to be given away!

I love to hear from my readers and sister-writers, so comment away! Chances are good you’re going to win something!

Update! My comments are now commenting! This is all just such magic sometimes… So – be sure to click on that comment bubble and leave me one and get a chance to win a fun prize in your FAVORITE color!

Oh bother! My silly commenting functionality is not working right now – as you’ve probably experienced if you tried to leave me a comment. I’ll be working on fixing that later today, so check back later tonight if you want to leave a comment! Thanks for visiting!

OK – so I decided it’s about time to start blogging…for real. Not once a quarter because I feel guilty, or a couple three times a year because I’m releasing a new book. Nope — I’m gonna do this every week. There’s lots going on with this thing I call my fledgling romance novelist career, and some of you just might be interested in hearing about it!

And another great reason to blog is I’m taking an awesome class taught by LaTessa Montgomery, and she’s teaching us all about blogging right now. So – here’s my homework!  *grin*

BTW – that little piece about releasing three books a year is not EXACTLY true…but one can hope (and plot, and plan, and plot some more…)   *very big grin*

So — I’m going to bite the bullet and start blogging at least once a week on Monday, Wednesday, or Friday. If I really start to get the hang of it, I might even try blogging twice a week. Here’s a taste of what you can expect!

Manic Monday – this is a good day to tell you all about the things that make me, and probably others, crazy. Now this crazy can be a good crazy, a bad crazy, or a really, truly manic crazy. Hmmm… I’m liking this idea.

Wicked Wednesday – The title says it all. Get ready for a virtual smorgasbord of wickedness of all kinds…good AND bad.  *wink*

Fav Friday – I don’t know about you, but Friday is definitely my favorite day of the week. This will be a good day to share some of my favorite things with everyone.

Be looking for some new stuff from me starting on a nicely manic date – Monday the 13th of February!

To help launch my baby blog, the wickedly fabulous Jenn LeBlanc has graciously agreed to be my first featured author to visit. Jenn, who is both a photographer and author, is famous for her illustrated historical romance series “The Rake And The Recluse.”

So be sure to check back on Wicked Wednesday, February 15th to visit with Jenn and have a chance to win a digital copy of her upcoming release, SUBMISSION!

Until then – all my best to you and have a great Friday-eve!!! (aka Thursday)

Wow! The anthology, Finding Ms. Wright: Three Tales of Extraordinary Love was released into the wild today! It’s available from Amazon, Barnes & Nobel, Smashwords, and All Romance eBooks. For those who prefer paperback, it will be available November 25th on Amazon and Barnes & Noble!

What a day! I was so excited/giddy for most of the day I couldn’t keep the smile off my face. Went to Denver’s Lady Jane Salon tonight and partied some more. Can’t celebrate a release without chocolate and WINE!!!

Evelyn and Alex’s story is a dream come true for me. One of many, if my plan for writing domination goes as planned! I really want to be the next Nora Roberts, you know!

I’m going to catch up on some well deserved and very much needed sleep, the it’s off to the next project! I’ve got a couple in the hopper that are just clamoring for attention, one of them being the sequel to Evelyn and another being a rewrite to my novella I completed last year, Fire Season. I need to to get moving on those edits so I can get it submitted!

I hope you’ll all join me for my writer’s journey on that project. I’ll give you the nitty gritty on what’s going on with the hero, the heroine, the plot, and the bad guy.

Thanks again to everyone who wrote me today, and/or gave me and my fellow authors support in buying Finding Ms. Wright. I hope you all enjoy the stories!

I’m excited to share the news that my novella, Evelyn, will be part of Finding Ms. Wright: Three Tales of Extraordinary Love, published by indie press 5 Prince Publishing! This anthology of three paranormal novellas is near and dear to my heart. It was written in cooperation with two of my writing sisters from Colorado Romance Writers, M.L. Guida and Hillary Seidl, and is each of us, our first publications!

It will be released November 15th in eBook and November 25th in trade paperback.

Amazon and Barnes and Nobel will carry Finding Ms. Wright in both eBook and paperback. It will also be available from Smashwords and All Romance eBooks in eBook.

How did Evelyn come about?

Well the characters, Evelyn and Alexander, introduced themselves to me at different times during my writing journey. Alexander, I’m going to call him Alex, even though he really dislikes that, was first. He walked right in one morning and started telling me all about how he was waiting for his love, The One, to awaken him. And could I please get a move on, because he had things to do, namely capturing an evil Wizard and stopping an inter-world war.

Evelyn came soon afterwards. I was working with my critique group at the time when she finally noticed I’d been calling for her. She strode over and immediately introduced herself, saying, “Hello. I’m Evelyn. Evelyn Wright. But you can call me Evie.” Looking over my shoulder she watched me write notes. “What are you doing?” she asked.

And so she was born.

Getting these two together was quite interesting. I had a basic idea of where I wanted to go, and what I wanted to so, and once I put it in motion, they just picked everything up and ran off with it! It’s been quite an interesting ride, with many twists and turns.

I’ve discovered that Evie is a true study of contrasts. She’s hesitant, even suspicious at first, but once she embraces something, she gives it her all. She is strong, independent, and willful, except of course when has a weaker moment and needs to be held and comforted and surrounded by love. To me, she sounds like a typical woman.

Alex, on the other hand, is strong, steadfast, and true. He knows exactly what he needs to do, and how he needs to do it. He’s hard working and not above getting his hands dirty. He’s loyal to his people and not above doing whatever it takes to protect those who he considers his, namely Evelyn and his two sisters, Annora and Analiese. He’s also regal, arrogant, and haughty, but what else would you expect from a Prince? So, I supposed in his own way, he’s also a study of contrasts.

The chemistry between these two began immediately. As soon as Evie set eyes on her Prince, she was enchanted. The story of how he came to be in the chamber where she found him fascinated her, but she was sick with the thought that maybe she was the one and only person in the world that could help him. There was such responsibility associated with the whole thing. But he was just so hot, and there was much at stake, how could she say no? In true Evie fashion, she pondered and questioned, then made up her mind, took hold of it all, and ran with it.

For Alex, it was love at first sight. She had rescued him from the purgatory he’d endured for almost 500 years. How could he not love her? Being totally attracted to her was just a bonus. He loved everything about her – her thoughtful periods as well as her manic. He admired her independence and her strength, and adored her vulnerability and emotions. In true Prince Alexander fashion, he captures her in a very large net that gives her the illusion of freedom, but keeps her close to him. He always opens the net when she sees it and freaks out, but she never quite leaves it. She’ll walk to the opening, turn and see him waiting for her within the net, and goes back to him.

Together, these two can do anything. I hope they touch my reader’s hearts as much as they did mine.