Wouldn’t that be a great line to add to your book?

In fact, isn’t that a great idea, period? Seems like I’m not the only one that thinks so. Someone’s already thought of that, created one, named it a Joey Bra, and is selling it on their website. Check it out here.  http://www.forbes.com/sites/kellyclay/2012/04/27/dont-know-where-to-put-your-iphone-theres-a-bra-for-that/

Hmmm…it’s really too bad I didn’t think of that.

Anyhoo, since I’m a writer and not an inventor, I’m always searching for bits of words that string together beautifully, especially for dialogue. Sometimes I find exactly what I’m searching for and my fingers fly over the keyboard in a staccato symphony of keeper verbiage. Other times, I hunt and peck and use the backspace and delete buttons way too often. Most times, my writing time is spent in a complicated marriage of the two.

Anyhoo, back to real words.

Words are very important to a writer. Just ask someone that pens tales about dialogue and word count and you’ll see myriad reactions. A startled stare and a panicked, “I gotta go.” A thoughtful twisting of the lips accompanied by the requisite “Humpf.” You could even see a full rolling of the eyes and hear them utter a heavy, and rather soulful, sigh.

Very rarely will you see a beaming smile and a quick nod. When you do, you’ll know that the writer you’re talking to has mastered their dialogue, and have even layered in sufficient emotion, power words, action verbs, and rich, earthy modifiers and descriptors that don’t all end in ‘ly. That’s right. They’ve likely just finished the final edits to their newest “baby” and has made the requisite word count their dream publisher has demanded.

So where do we writers come up with these words?

You see that person, over there in the corner of the coffee shop, madly typing then stopping for a moment before starting up again? Very likely you’re seeing a writer. If they’re wearing a shirt that says, “Be careful or you’ll wind up in my novel“ you can be sure of it. 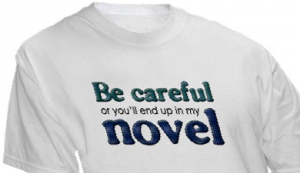 Think about it. We write about people. What better way to research what to write about than be out among people? It’s amazing what you can pick up just by being quiet and listening to those around you. A good friend of mine has texted me some some real zingers. Take this one for instance:

“My wife is totally unreasonable. She won’t let me move my girlfriend into our basement apartment.”

Poor guy. Kinda makes you wanna smack him in the face, doesn’t it? See, those words sparked a great emotional outburst that I can now use for the next time my heroine is frustrated.

So, next time really listen when you’re riding on the bus, or are in the lunchroom at work. Restaurants are famous for awesome chitchat. Don’t forget to listen while waiting to get your license renewed at the DMV. That’s a perfect place for both drama and word research.

Another great place is in line at the grocery store, which just happens to be one of my favorites! Family gatherings and company picnics/Christmas parties also net a treasure trove of words, but be careful to revise carefully to keep your undercover status intact!

I love humor and oftentimes add a dash of witty (I hope!) banter to my writing. So if I liked and/or smiled/laughed at something that I’ve heard, I’m more than likely going to write it down for use in one project or another. In fact, I’ve got tons of bits of paper and post-it notes with one-liners written on them (total fodder for another blog).

Speaking of laughing, I have to tell you that I have used my bra as a purse. Many times. Recently in fact. And I don’t put my valuables in the band ala the Joey Bra. Nope – I store my items high up in the cup for easy access. That way you don’t have to worry about digging around for what you need.

So what was the valuable cargo I stored? Well, long story short, I have a new phone. I finally admitted that my old Razor flip phone has seen better days, especially since it cheeps and chirps a lot and makes my cats crazy. So, I bit the bullet and now have a “smart” phone.

So this past Friday, me and my shiny, clean, and scratch free communicator were at the Denver Center for Performing Arts to see Sense and Sensibility – The Musical (fabulous show, by the way!)  and we got the “please turn off your cell phones for the duration of the performance” reminder. Being the dutiful patron of the arts that I am, I pulled my new baby from it’s nest in my pocket and turned it off. Just as I was returning it, I had a horrifying thought,

This horrific thought was quickly followed by,

“And what if the ‘protective case’ that I purchased doesn’t work, and it breaks when it falls out of my pocket?”

That second scenario was enough to get me to pull that phone back out of my pocket and stuff it in the safest place I know – in my bra. My actions totally cracked up my best girlfriend, who looked at me first like I was crazy then, once she thought about it, understood the extreme intelligence of my move.

As soon as the shiny bit of technology was tucked away, I could see my mom and grandma both smiling and nodding in approval. They knew all about, and actively utilized that “safe” place where a smart women can easily place extremely high value items. They taught me that trick. I’ve even carried $1,500.00 cash in there once, so I knew my expensive brand new communication device was safe until I decided to retrieve it.

So have you ever used your bra as a purse? Tell me your story! I’d love to hear about it!

P.S. If you haven’t checked out Kristen Lamb’s blog yet – do so! She’s kinda my hero, especially after I saw her at a writing conference held in Denver and hosted by Heart of Denver Romance Writers and Colorado Romance Writers. She’s got lots of great writing tips plus a great and entertaining story to go with them! Check out her book, “We Are Not Alone” for great ideas on blogging and social media. Next month, she will be releasing “Rise of the Machines” her brand new book on social media and blogging. Both are gems for those that want to learn more about social media and how you can use the different sites to effectively increase your discoverability. Totally worth it!